In this article, I summarize some famous state-space models. Here I won’t go into details but focus on the entire map to get an overview. All these state-space models originate from Bayesian filter. In these models, two stochastic processes are considered. The first process is states $x_t$, and the second process is observations or measurements $y_t$, where $t$ means “time” but generally the processes are not restricted to time series. We are interested in the true value of states, but we can only observe the value of observations. Therefore, state-space models aim to estimate states based on observations. Two relationships should be addressed:

No direct relationship exists between any two observations. A common assumption is the Markov property, which assumes that the current state depends only on the previous state, namely $P(x_t | x_{1:t-1})=P(x_t|x_{t-1})$.

Bayesian filters estimate $x_t$ by the posterior distribution $p(x_t | y_{1:t})$. Usually the state-to-state probability and state-to-observation probability cannot be obtained directly when modeling practical problems. Instead, they should be inferred from prediction model $x_t=f(x_{t-1})$ and measurement model $y_t=g(x_t)$. And a series of questions must be answered:

According to different answers to these questions, we have different filters as follows. 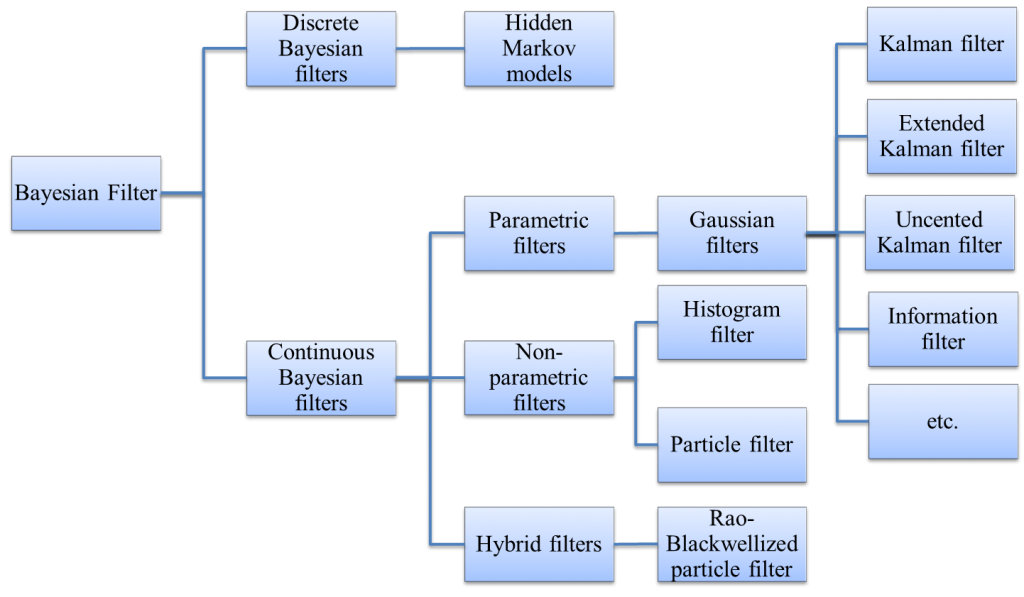 Based on whether the state $x_t$ is discrete or continuous, Bayesian filters are divided into discrete filters and continuous filters. When state $x_t$ can only be discrete values, the state-to-state probability can be expressed by transition matrix $A=[a_{i,j}]$ where $a_{i,j}=P(x_t =j|x_{t-1}=i)$.