After the relatively poor performance of U.S. in the 2018 Winter Olympics in PyeongChang, South Korea, we found it a unique opportunity to look at the placement of U.S. in the Olympics over the years to determine if the country’s success has really been changing. To explore this opportunity, we used an Olympic reference dataset (https://www.sports-reference.com/olympics/) that contained information on every athlete’s Olympic results including events participated in, medal placing, country represented, and place of birth.

The objectives of our analysis were:

The data for the country’s athletes was collected from an Olympic reference dataset (https://www.sports-reference.com/olympics/).  In addition to the athlete data, we also needed data about the countries themselves, specifically population data. After our data was collected we needed to define a way to measure the success of a country.

As a group, we decided that we would measure a country’s success based on a medal per participant and a medal per capita basis. We felt as though this was the most impartial basis to determine success of a country because it minimized the skewness that would be caused by countries, such as the United States, who have much higher participants in each of the Olympic Games. Without the per participant or per capita number, success would be determined on a total medal count and countries, such as the United States, would have a higher chance of winning medals because they have more participants.

After we collected our data and defined the measures of success, we then moved into our analysis stage. We explored the data to analyze the United States’ performance in the Olympic Games over time and determine whether the dominance of the United States has declined over time.

In order to compare the United States’ performance over time we needed to come up with a measure that is capable of being applied to each of the past Olympics evenly.  Due to the number of events constantly increasing, it is obvious that the number of medals the U.S. has won would also increase over time and is therefore not a fair comparison between past and current Olympics.  To counter this change, we decided to measure the number of medals that the U.S. won and divide it by the number of U.S. athletes that qualified for the Olympics for each year.  Because both qualifications and medals should increase evenly with the number of events, it allows us to compare how successful our athletes were at each Olympics across history. 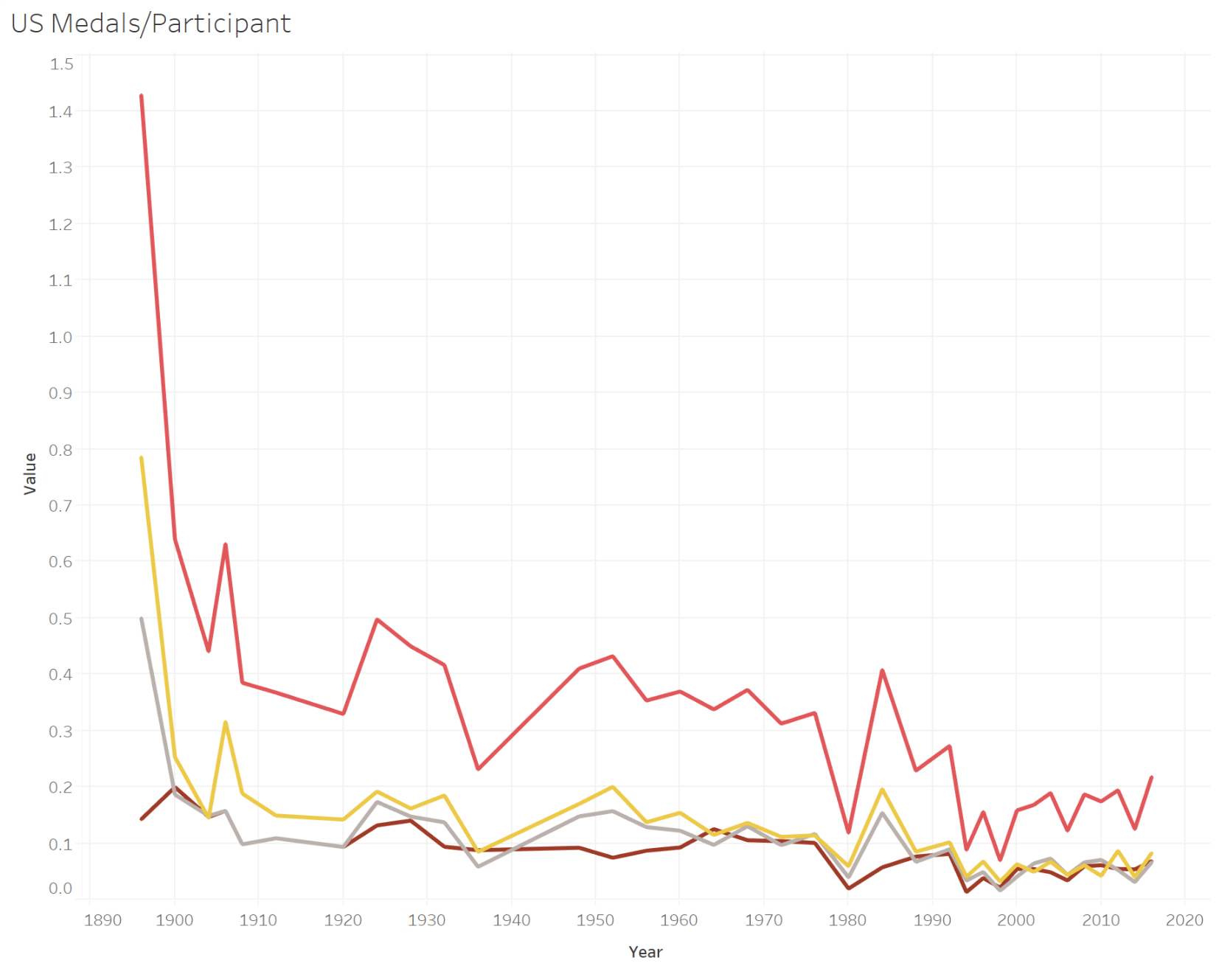 The results of our analysis are shown above in Figure 1.  Based on this measure, it is clear that the U.S. has become less successful in recent years.  Since the 1992 Summer Olympics in Barcelona, Spain, it seems that the U.S. has taken a more drastic slide in medal placing, showing that participants are receiving medals at half of the rate that they were for most of the 1900’s (dropping from about 2 in 5 to 1 in 5).  This is especially surprising given the dominance that Michael Phelps has had during the majority of that period, accounting for 28 U.S. medals on his own over a 16 year period.  One other thing to note is that the first few Olympics seem to be outliers in the number of medals won.  At the time, fewer countries participated in the Olympics so it makes sense that the U.S. was relatively more successful during the first few.

4.2 U.S.’s Performance Compared to Other Countries Over Time

When comparing countries over time, we wanted to first establish an overall total medal count for each country, so we choose to make a heat map of the summed medals won at each Olympic games for all the countries in the world. 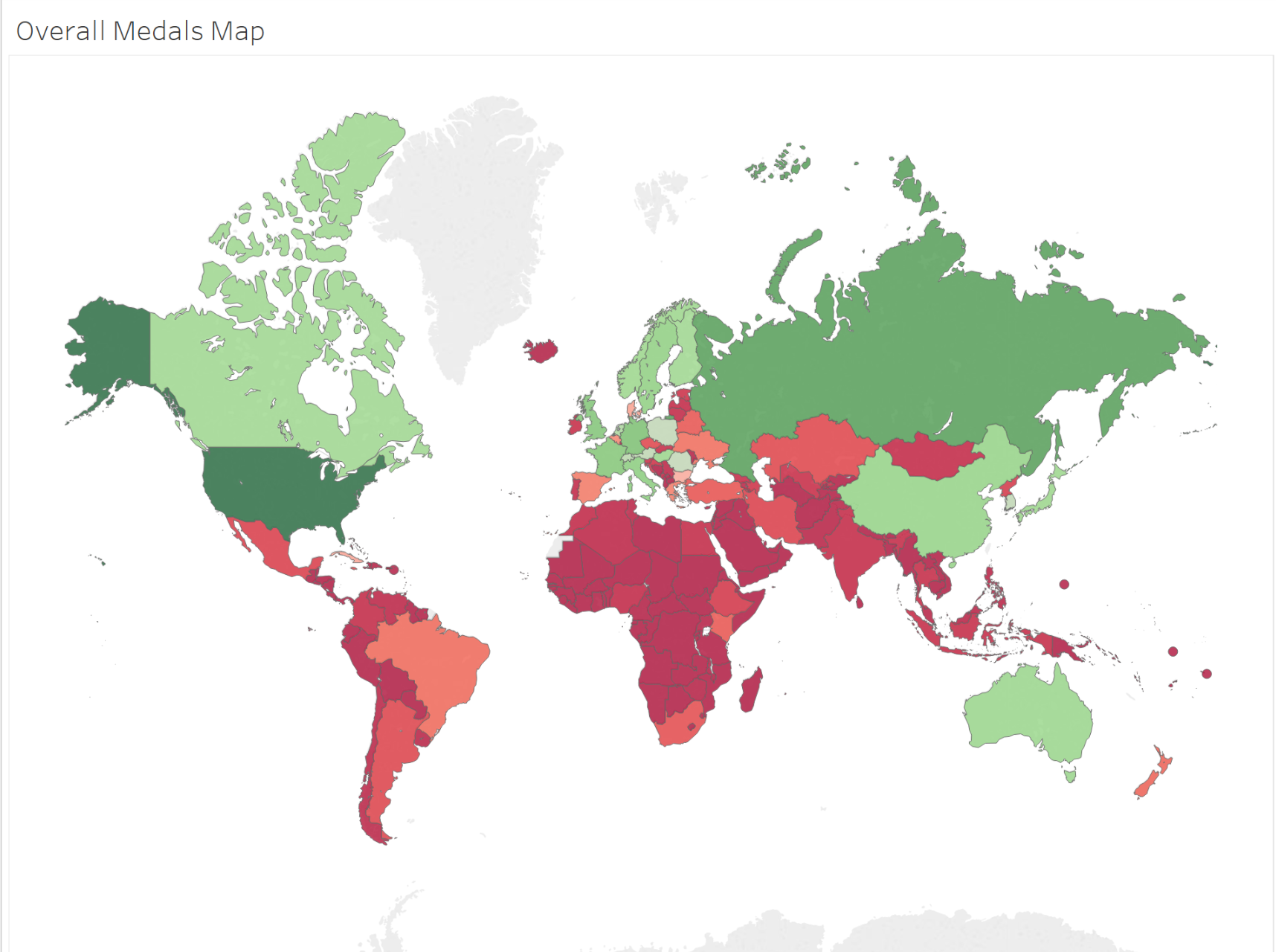 Figure 2: A heat map of the total number of medals won by country. Darker green means that the country has won a relatively larger number of medals while dark red means they have won relatively fewer. Any countries not colored in have never won a medal at the Olympics.

It can be seen from Figure 2 that the United States has the highest total medal count. This shows that the United States has been the top historical performer on a pure volume basis. From Figure 2 we noticed that the size of the country seemed to help determine Olympic success, so wanted to see if there was a more accurate way to visualize a country’s performance at the Olympics. To this end, we created another world map visual. This time, we used total medal count in tandem with country population data from https://data.worldbank.org/indicator/SP.POP.TOTL. By dividing medal count by population, we were able to visualize and rank countries on a per capita basis. 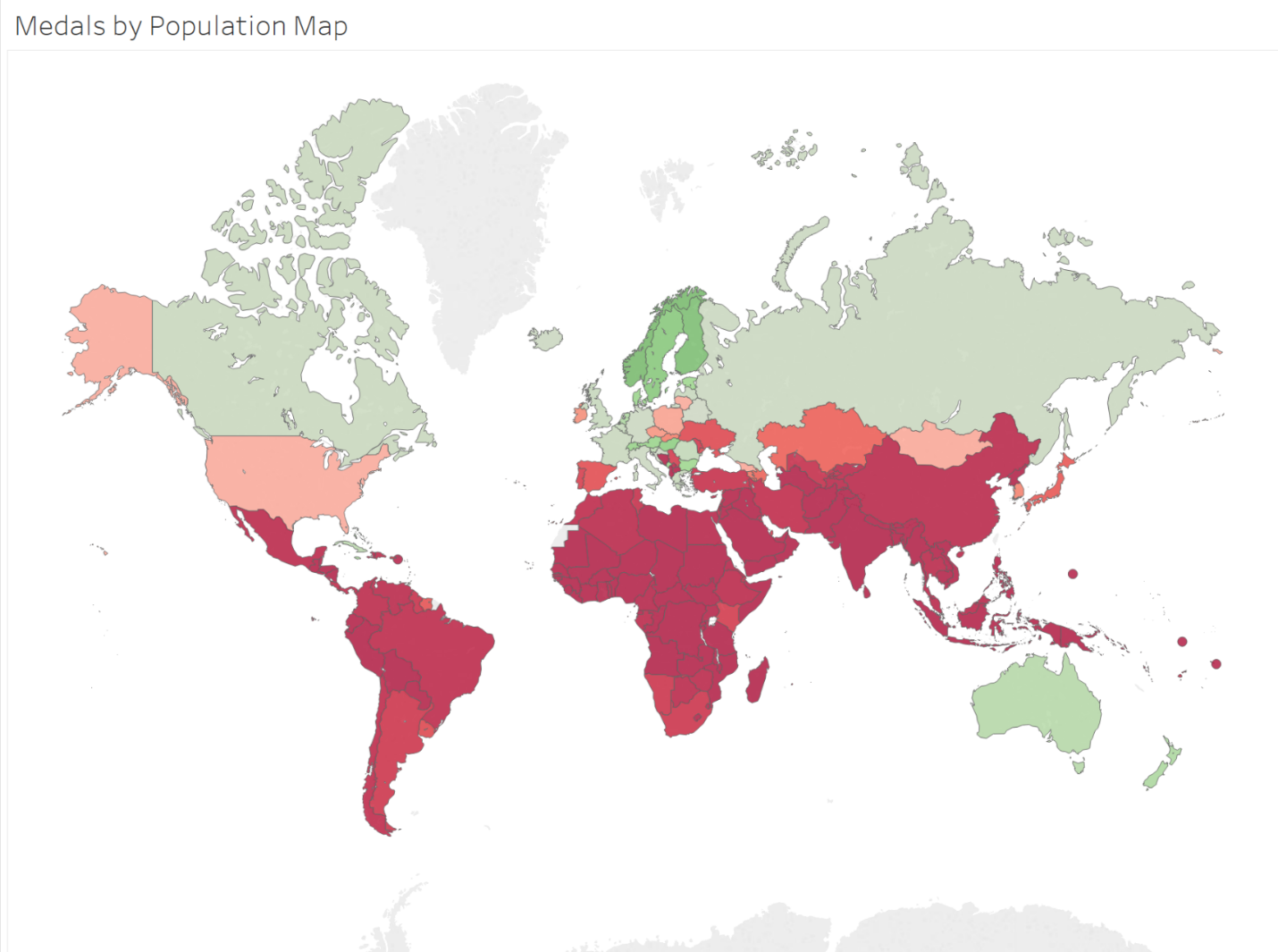 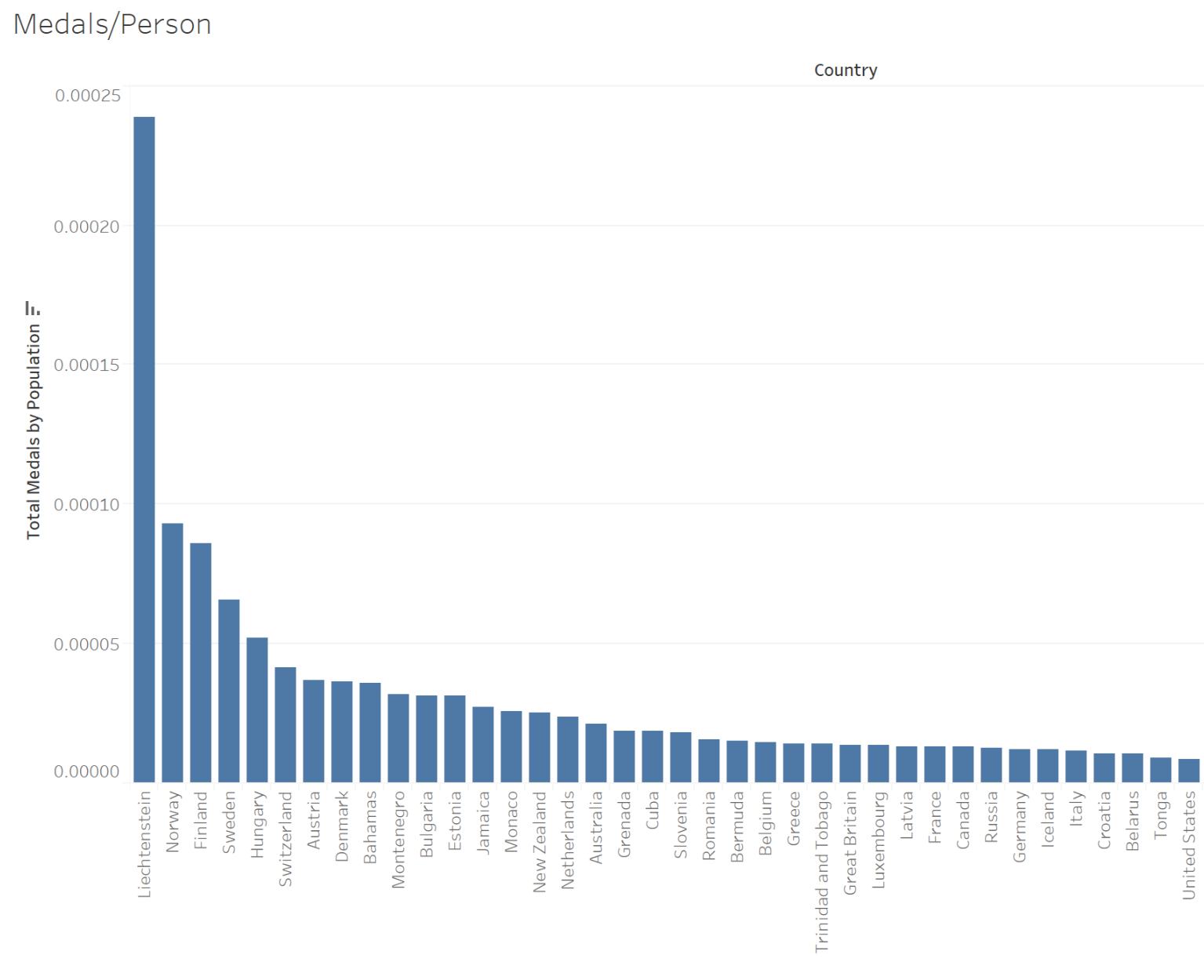 Figure 4: A bar graph showing the top 38 countries based on medals per capita results. This derivation was the same as in Figure 3, but shows the top countries listed in order of the best results.

The per capita medal information from Figures 3 and Figure 4 provides another perspective of Olympic success. It is a better indicator of the average Olympic skill of a country because it accounts for the smaller athlete pool of less populous nations. One major takeaway is that the United States is far less dominant in this metric than in the total medals map. The U.S. flips from dark green to light red on the heat map in Figures 2 and Figure 3 respectively, and then falls from 1st to 38th in overall rankings for total medal count and per capita medal count, respectively (as seen in Figure 4).

Another interesting result of the per capita analysis is the dominance of Liechtenstein. As can be seen in Figure 4, the tiny European country has more than double the medals per capita of any other nation. Liechtenstein is also the least populous country to ever medal at the Olympic games, with a population of just 37,666 in 2016. Liechtenstein has won ten medals in its history, and interestingly all ten have been in Alpine Skiing. Even more intriguing is that seven of those ten medals have been won by one family!

The success of Liechtenstein in our per capita metric is indicative of a potential pitfall of using a per capita method. There is extremely high variability in countries with very small populations, as can be seen by the fact that ten medals is enough to make Liechtenstein more than double any other nation in this metric. Neither total medal count nor per capita medal count should be seen as an end-all-be-all metric of Olympic success.

Another takeaway from the per capita data that we wanted to investigate further was the success of the Nordic countries such as Sweden, Finland, and Norway. They all rank very highly on a per capita medal basis, and we wanted to investigate why that might be. Our hypothesis was that their success was driven by dominance in the Winter Olympic Games, given the snowy climate of the region. To test this, we decided to make the same per capita map based only on the Summer Olympic Games, to see if the Nordic countries regressed in the rankings because of an overreliance on winter medals. 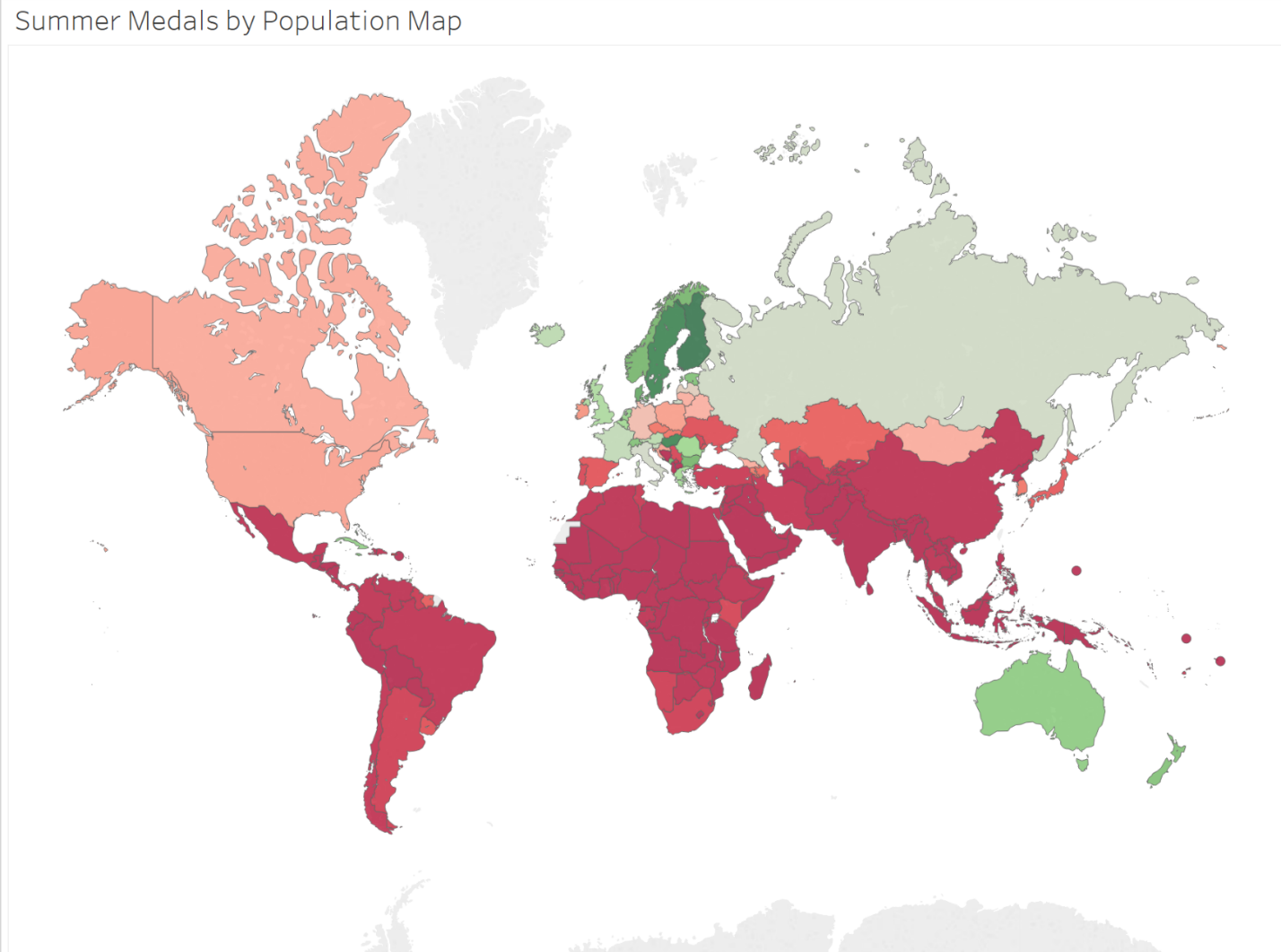 To our surprise, the countries we expected to regress looked even stronger in the Summer Olympics heat map from Figure 5. The Nordic countries turned an even darker shade of green compared to the rest of the world. This showed us that their success was not relying on the winter games, and those countries were in fact also very strong in the summer. This indicates that their success is due to other factors, perhaps such as superior training facilities and programs or an overall more athletic population. 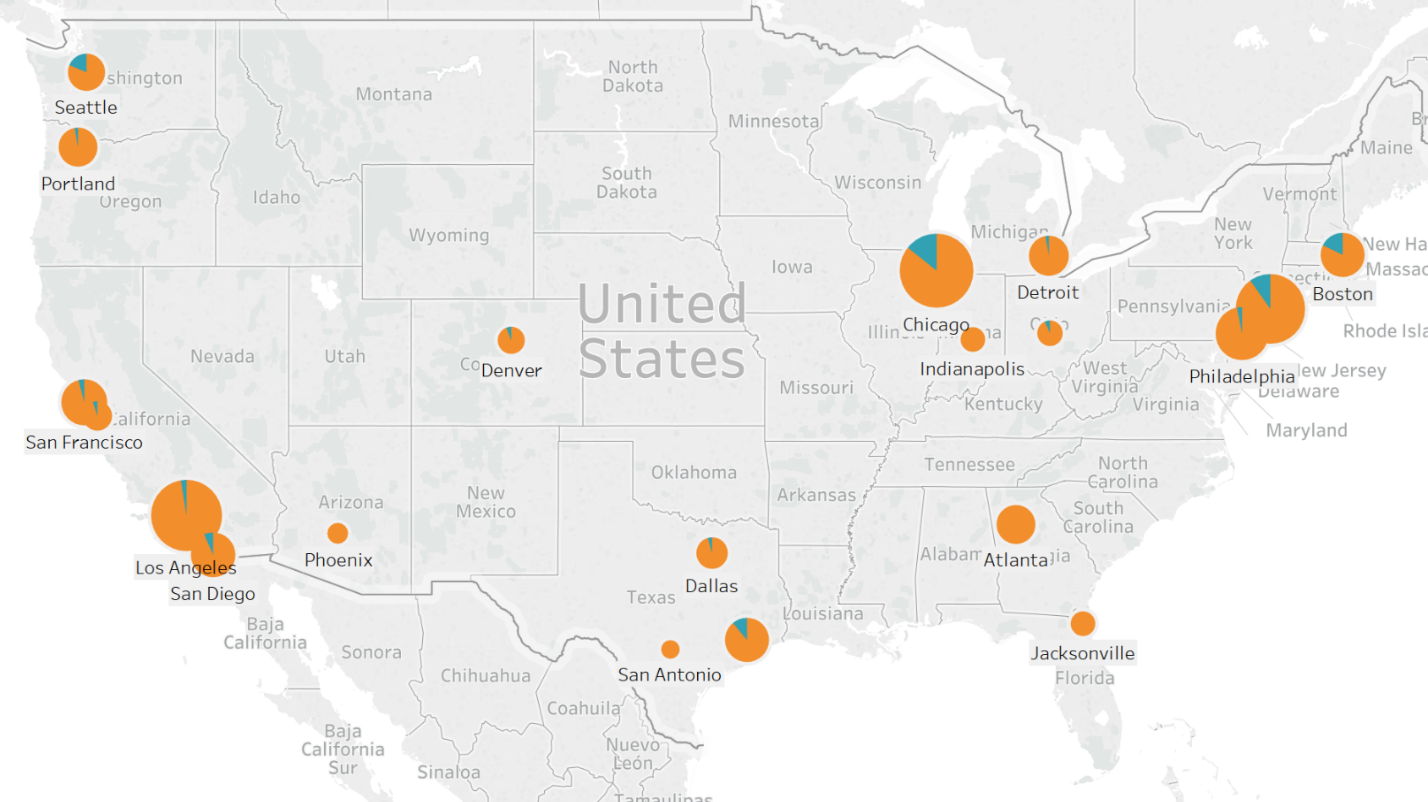 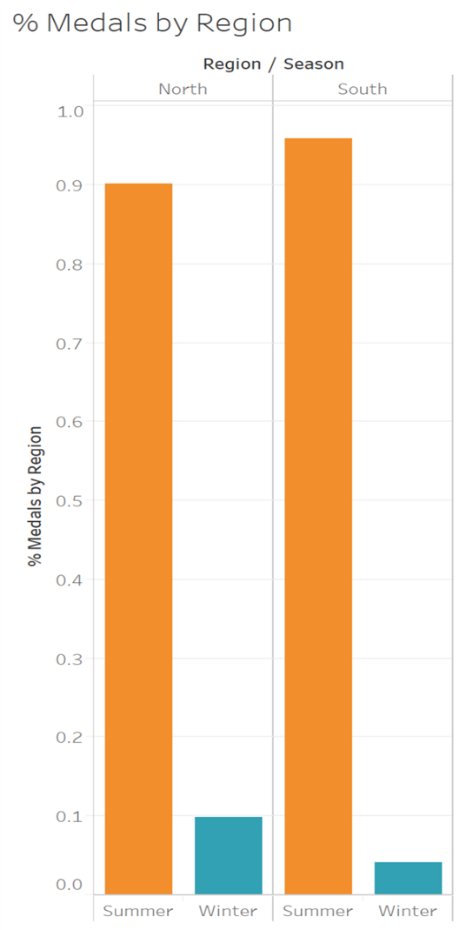 After looking at the per capita medals of different countries and seeing how few so many countries had, as well as the surprisingly large portion of overall US medals Michael Phelps won while he competed, we wondered what the expected characteristics of Michael Phelps would be if he were a country. To do this we calculated both the average number of people per medal and the average amount of land area per medal. We did this by dividing the total number of people and land area by the total number of medals available in the 4 Olympics Phelps competed in.

Based on this, we found that if Michael Phelps were a country he would be expected to have a population of 57,501,375 and a land area of 442,794 square miles. This would make him the 24th largest country in population and land area! A similar sized country is South Africa.

Just for fun, we decided to make a to-scale visualization of what the country of Michael Phelps would look like on a map. 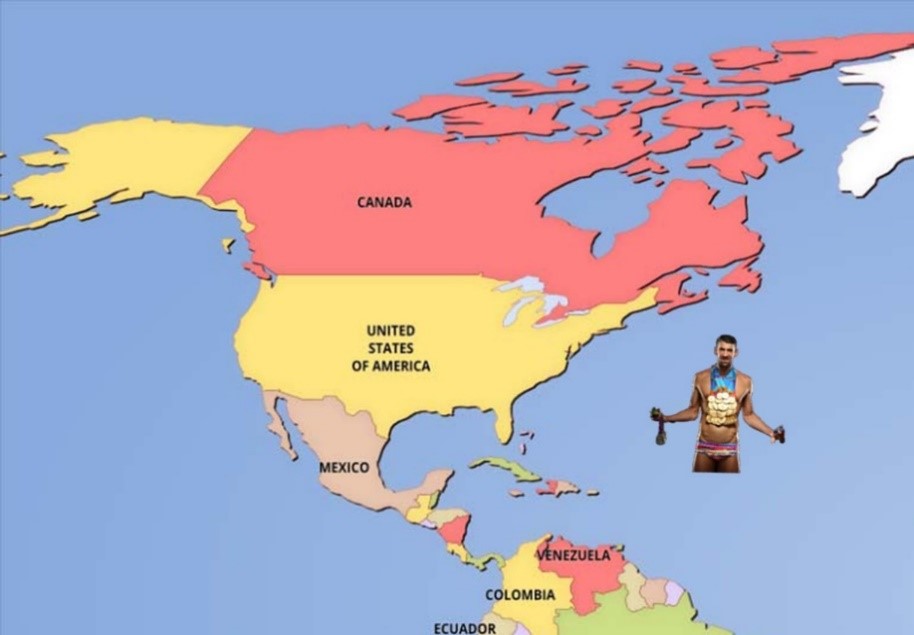 Figure 9: A map showing a to-scale representation of how large a country represented just by the Olympic medal count of Michael Phelps would be expected to be. This analysis was done only considering his results compared to the rest of the world in the 4 Summer Olympics in which Phelps competed.

Overall, the United States still performs well in the Olympic Games. However, per capita the US is not as dominate as they may sometime seem. There are countries, such as Lichtenstein, with much higher numbers of medals per capita. Many of these countries are concentrated in Northern Europe. These countries tend to perform well in both the Summer and Winter games.

Part of the reason that the number of medals the United States wins is likely decreasing is because of the growing dominance of developing nations such as China. Competing at a high level in the Olympics is incredibly expensive for countries. When looking at a map of Olympic success per capita, success seems to track closely to global wealth and development. Many countries, such as China and South Korea have rapidly developed and increased in wealth. These countries have begun to perform well at the Olympics recently which increases the difficulty for US athletes to win medals and decreases the US medal count. The Olympics have also added many new events in recent years, many of them, such as rugby, the US is not particularly strong in.

Just as there a high concentration of medals won by athletes born in Northern Europe compared to other regions, there are significant geographical differences in the number and type of medals won based on the birthplace of athletes within the United States as well. For example, athletes born in cities in the northern half of the United States tend to perform better in the Winter Olympics than those born in the southern half. However, there is not a lot of difference in overall medal totals between these two groups.