Every sports fan knows that their favorite teams have more chance to win on the home court; and for professional athletes, they will surely make every effort to secure home-court victories in the regular season. The goal of this article is to 1) determine which teams in the NBA have the best home-court advantage; 2) provide some insights into how does the number of rest days of home and away teams impact the home-court advantage; as well as 3) determine what are some other possible factors to home-court advantage from 2011-2012 through 2015-2016 seasons.

Why do we choose NBA among the four major American pro sports?

We used Excel to process our dataset with preliminary data cleaning and integration. Tableau is also used for data analysis and visualization.

The dataset is retrieved from the basketball-reference website: http://www.basketball-reference.com/leagues/. It provides game logs which contains home/away team name, date, score, stats, number of attendance, and number of foul calls from 2011-2012 through 2015-2016 seasons. The rest-days data are not provided for each game log, so we used Excel to manually calculate the days of rest prior to each game for the home/away teams to find the impact of rest on home-court advantage. 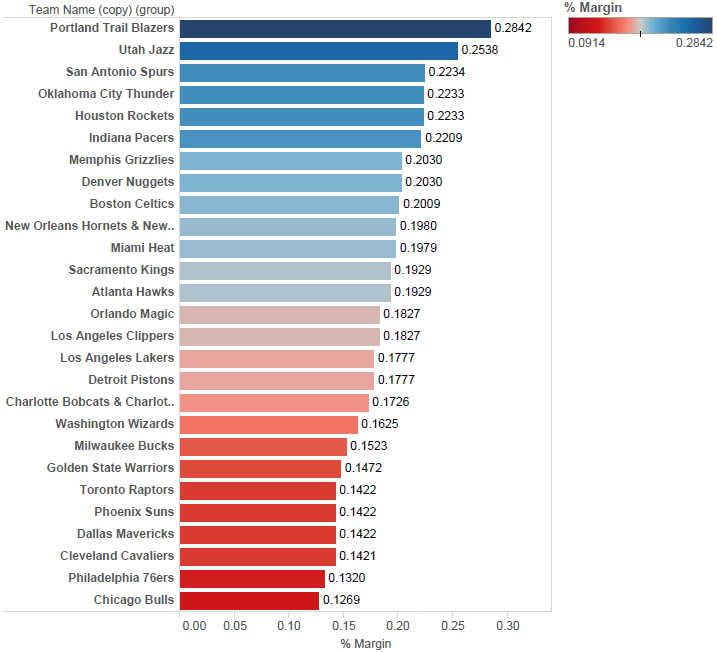 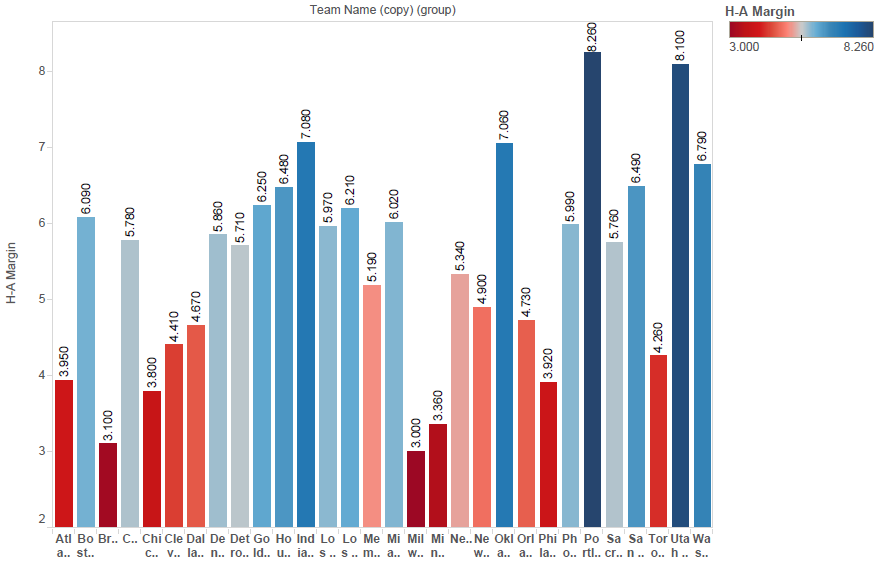 With the data of rest-days we calculated in Excel, we could also explore the relationship between the rest days and home-court advantage. Table 1 below shows the number of data tuples (number of games) according to different number of rest days for home teams and away teams. We could see that not only the away teams are much more likely to play back-to-back games, they are also more likely to be placed in matchups where home teams have a rest advantage over them. 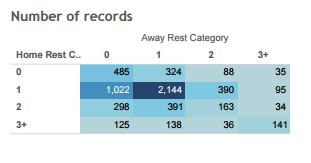 Table 1: Distribution of Rest for Home vs. Away Teams

In Table 1, we discovered that some certain categories of rest day distribution had less than 100 tuples. Since smaller dataset would be more likely to lead to biased results, we decided to omit these data in our analysis presented in Table 2, which shows the relation between different rest days for home/away teams and average winning margin. 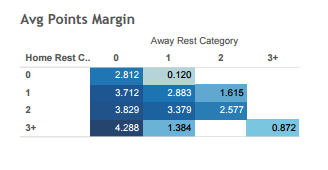 Table 2: Average Margin of Victory Points for home teams based on distribution of rest for Home vs Away Teams

Based on Table 2, we could also see that under same rest conditions, home teams maintained an average of 2.757 victory points, which is calculated based on the average point margin per game when home team and away team have the same number of rest days. However, the average home court advantage of all games shows 2.800 victory points, which is slightly higher because home teams are less likely to be placed in matchups with less rest days than away teams.

Then we try to identify if there are other possible factors that could impact the home-court advantage in the NBA.

In the Figure 3 below, the x-axis represents the months in a season and y-axis represents the average of the home win margin per game from the past five season. The result indicates that teams have the lowest home court winning margin in February. We believed that it can be explained by the All-Star Weekend held every year in that month, during which every team will take a long period of break. Such results related to over-resting are also seen in Table 2 above: when both teams have more than 3 days of rest, the winning margin of home teams reduce significantly. Overall, we could conclude that home court advantage will be diminished if both teams are in well-rested situations. 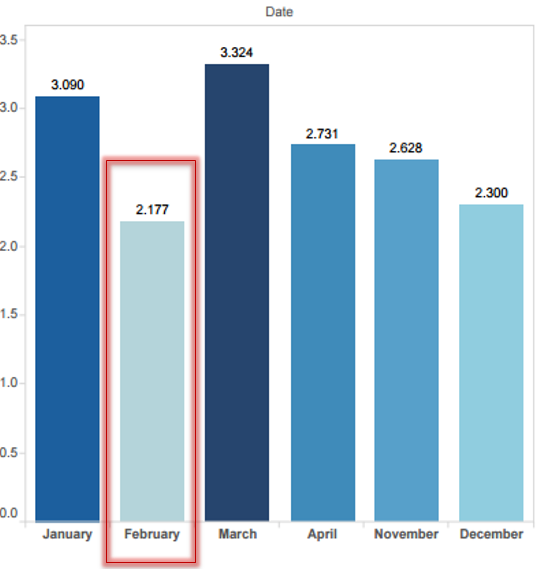 In figure 4 below, we show the geographic location of each team on the map with different shapes representing different divisions in the league. The home-court advantage index is represented by different color. With the color closer to red, the team has a better home-court advantage. Figure 4 clearly shows that the Northwest division have the most home-court advantage. We believed that the altitudes of the arena locations may be a possible factor, as Salt Lake City and Denver both located in one of the highest elevation states among United States. 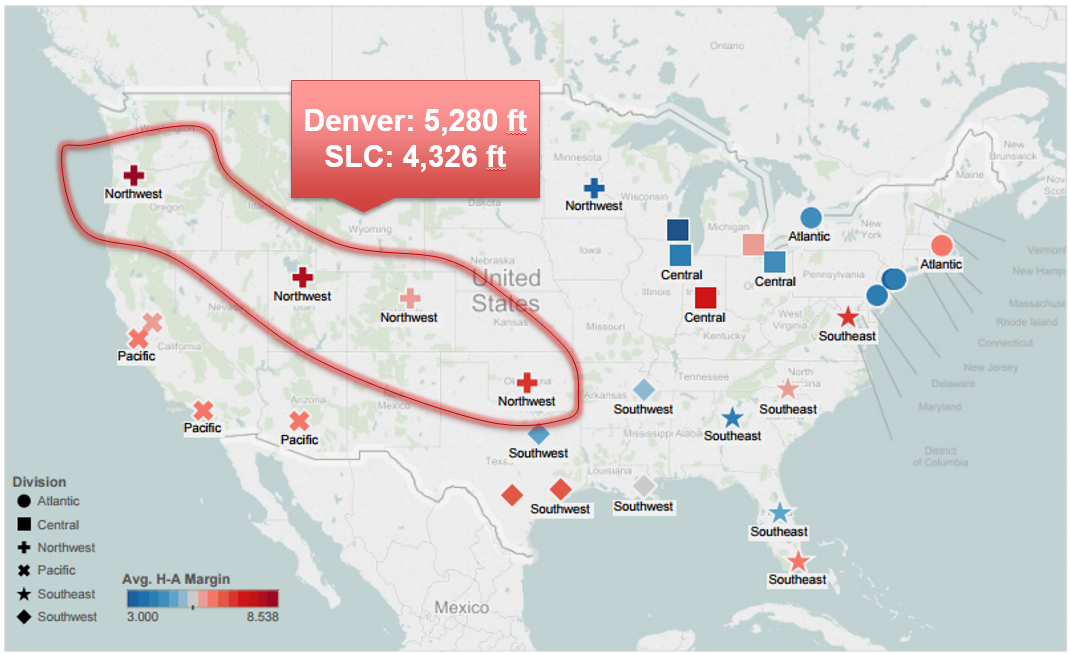 Figure 6 below shows the relationship of the supportive crowd and the home-court advantage. Again the blue line represents the home-court advantage index, and the red line represents the average home game attendance for each team. In the figure, we found that lower attendance tend to result in a lower index. However, there are some exceptions such as LA Lakers, Chicago Bulls, and NY Knick. We believe this can be explained by the fact that those teams are the most popular team in NBA and they attract large amount of attendance no matter how they perform on home court (highlight in red rectangle). Another thing worth to be noticed is the average attendance for San Antonio Spurs and Oklahoma City Thunder, both teams have a relatively low average attendance because they have a small-size arena compare to other teams in the league (highlight in blue rectangle).

In this article, we demonstrate the use of Tableau to run data visualization regarding to the home-court advantage in NBA from 2011-2012 through 2015-2016 seasons. Considering the results obtained based on our Indicator 1 & 2, we were able to summarize the top teams with the most home-court advantage as listed in the table below.

In terms of the influence of rest days on home court advantage, we concluded that the more days of rest home team gets, and the less days of rest visitor team gets, the larger home win probability there will be. We could also see that with same number of rest days, home teams would defeat the visitor by 2.757 points, which is less than the average home win margin of 2.800.  It is due to that home teams are less likely to be placed in matchups with less rest days than away teams.

Last but not least, we also explored the relation between home-court advantage and other factors such as time of the year, geographic location, average foul calls margin, as well as the average attendance. In general, our results show that: in February home teams get least home advantage; large home court advantages at North West Division could be explained by altitude; visitor teams get more fouls than they do at home; attendance and home court advantage has a positive relation except for some arenas that are too popular or too small.