There are many examples of time series in real life. The most common demonstration of a time series is time plot. Figure 1 demonstrated the daily average temperature in Madison for August 2017 (data from National weather service). The time series shows a fluctuating but slowly decreasing trend. 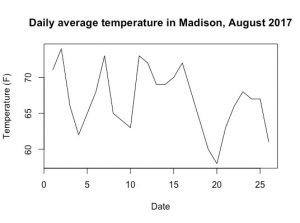 Another example is shown in Figure 2, which shows the quarterly beer production in Australia over the years 1974 – 1985 (data from DataMarket). It is clear that the beer production shown in this figure demonstrates a clear seasonal pattern. 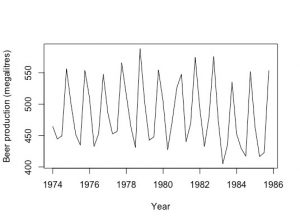 In this section, two types of stationarity of time series are introduced.

From the definition, we can see that the probability distribution characteristics of a strictly stationary process remain the same as the process shifts over time. The probability characteristics are time invariant. Specifically, it also implies that for any $t_1, t_2$, the covariance function $Cov(Y_{t_1}, Y_{t_2})=\gamma(t_1-t_2)$ depends only on the time lag $t_1-t_2$, provided that each $Y_t$ has a finite second moment.

Strict stationarity imposes a very strong distributional constraint on the time series, which might not be applicable in real applications. Therefore, another type of stationarity, named weak stationarity, will be introduced. A process ${Y_t}$ is (weak) stationary if it satisfies:

Some basic properties of the auto-covariance function are

Some basic properties of the ACF are

The ACF ${\rho(k)}$ is of prime interest in the study of stationary process, because it gives a summary of relations between values at different time lags.

To study a given time series ${Y_t}$, the summary measures have to be calculated based on the sample in the following way.

As an example, Figure 3 shows the ACF for the time series in the daily temperature example. The ACF for a time series can be plotted easily using function “$acf()$” for a $ts$ (time series) object in R. The dashed lines in Figure 3 show the 95% percent confidence interval for the correlations being zero. Therefore, it can be observed that only $\rho(0)$ and $\rho(1)$ are significant at confidence level $\alpha=0.05$. We can regard this type of ACF as an ACF from a stationary time series, and it thus can be modeled as an order 1 moving average (MA) model since only $\rho(0)$ and $\rho(1)$ are significant. 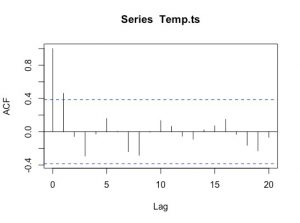 Figure 3. ACF for the time series in the daily temperature example.

Similarly, the ACF for the time series in the Australian beer example is shown in Figure 4. It is clear that the correlations show a periodic pattern, and all correlations for the first and third quarters are significant at the confidence level $\alpha=0.05$. In practice, we have to remove the seasonal trend for such type of data before analyzing it as a stationary time series. 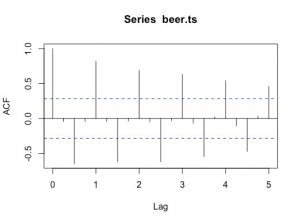 Figure 4. ACF for the time series in the Australian beer example.

9 thoughts on “Stationary time series and its properties”