The event of an airborne animal hitting an airplane in flight is referred as bird strike. Although bird strikes are a lesser hazard to aviation than some other well-known hazards such as air turbulence and icing, it still poses a sizable threat to airline safety and do present risk that needs to be addressed. According to Bird Strike Committee USA, wildlife strikes cause over $650 million annually in damage to U.S. civil and military aviation.

The goal of this article is to discuss some of the characteristics of bird strikes, raise the awareness of this issue, and help reduce the likelihood of bird strikes.

I used Excel to preprocess the dataset and Tableau 10.1 to visualize the data.

The data is acquired from Federal Aviation Administration website. It contains a total of 140,537 bird strike records in United States from the year of 2000 to the end of 2015. The dataset documents each incident of bird strike in terms of date, damage to aircraft, cost to repair, bird species, location, types of Airline, etc., with a total of 94 fields.

According to the U.S. Department of Agriculture, many populations of wildlife species have grown significantly in the last 10 – 20 years and adapted to living in urban environments, including airports. Such explosion in wildlife population has led to the increase in bird strikes as show in the Figure 1 below. The number of strikes reported annually doubled from 6,561 in 2004 to 13,692 in 2014. The number of bird strike records will continue to grow as there is almost a linear increase in the number of incidents in the last decade. 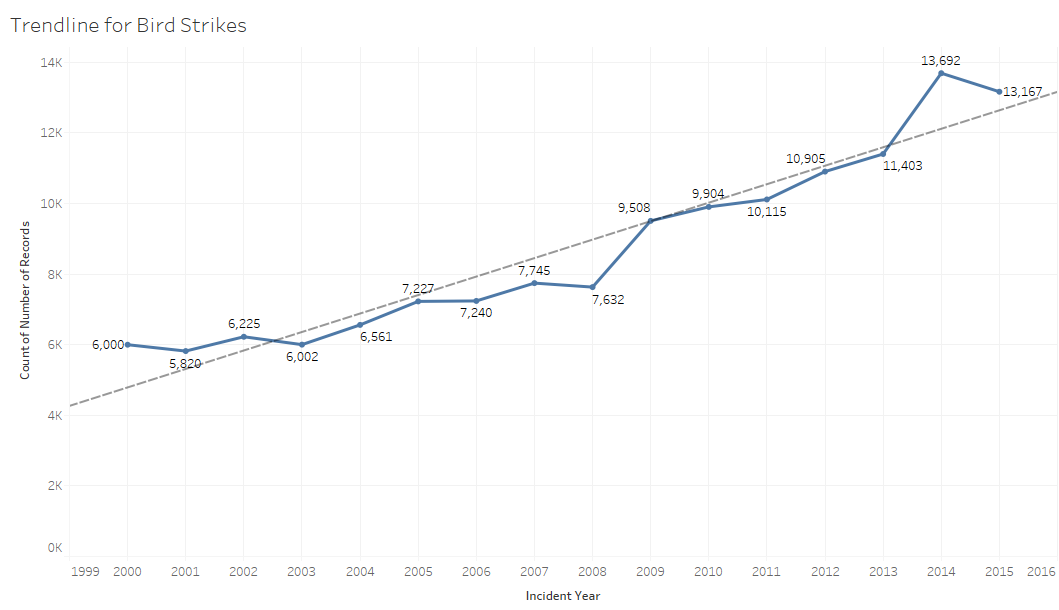 Along with those wildlife that live in the United States, there are also between 500 million to 1 billion birds that migrate over United States each year. And this could explain the fact that although bird strikes happen any time of the year, the prime months for bird strikes falls between July to October, which is the typical migratory season. The figure 2 below depicts the bird strikes in each month, and July to October sum up to 52.2% of the annual total. 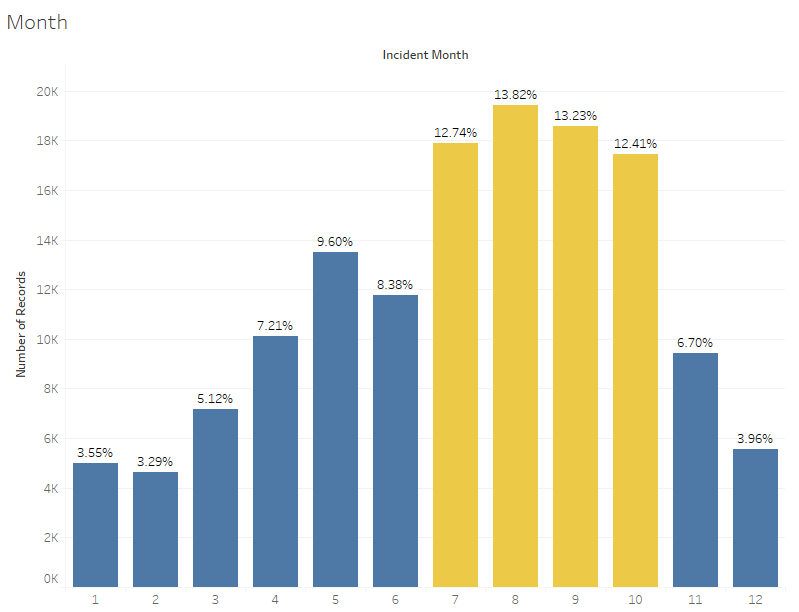 Figure 3 describes the number of bird strikes occurred during different phases of flight and time of day, where “phase of flight” is a set of term to categorize the operational phase during the aircraft accident. It is not surprising to see that majority of bird strikes occurring during the day since most flights are in the daytime. However, birds do fly a lot at night which makes the night the second highest time for bird strikes.

Figure 4 describes the height of the aircraft when bird strikes occur. As show in both figure 3 and 4, bird strikes usually occur when an aircraft is flying at low attitudes. Hence, the most common conditions for a bird strike are during approaching, landing, or taking-off with the altitude within 100 feet above ground level. This could be explained by the fact that most bird species fly at a low attitude; however, there is also a great number of bird strikes from 900 feet to 4000 feet above ground level as shown in the Figure 4 below. 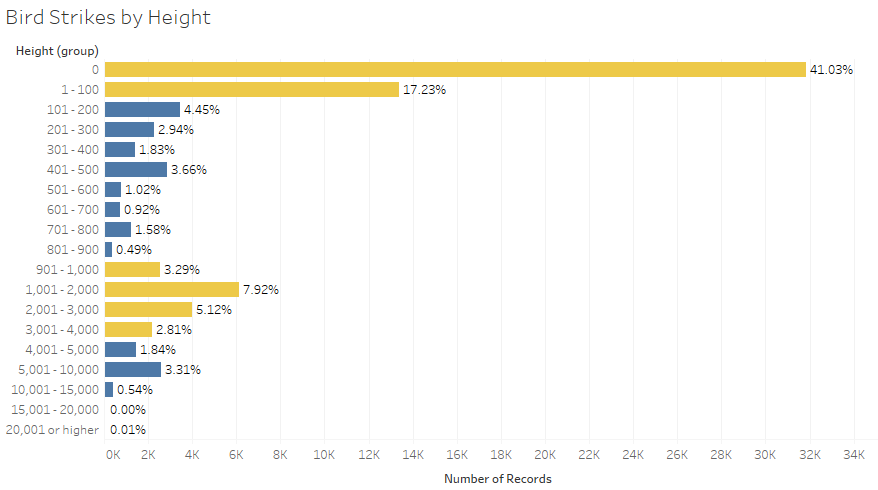 While bird strikes most likely to damage the wings and the engines, all areas of an aircraft can be damage as shown in the Table 1 below. A hit in windshield may result in the cracking of the surface of windshield and may possibly disrupt the air pressure inside the cabin. Meanwhile, when wildlife get caught inside the engine, it can possibly cause a disruption in the rotatory motion of the fan blades and result in the failure of the engine. 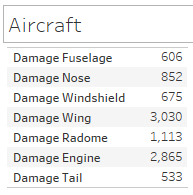 We must also keep in mind that many bird species are capable of inflicting damage to aircrafts. Between 2000 and 2015, there are over 694 species of birds that were involved in strikes. Although the Mourning Doves are the most found species with 7,025 records in Bird Strikes, with only 2% chance of causing damages, the Mourning Doves had not been listed as the most hazardous bird species to flight (only 135 damaged records). The figure 5 below identified a list of birds that are most hazardous to flight: Gulls (521), Canada goose (496), White-tailed deer (442), Red-tailed hawk (284), Turkey vulture (275). In general, any size of birds is problematic and have the possibility to result in accidents. 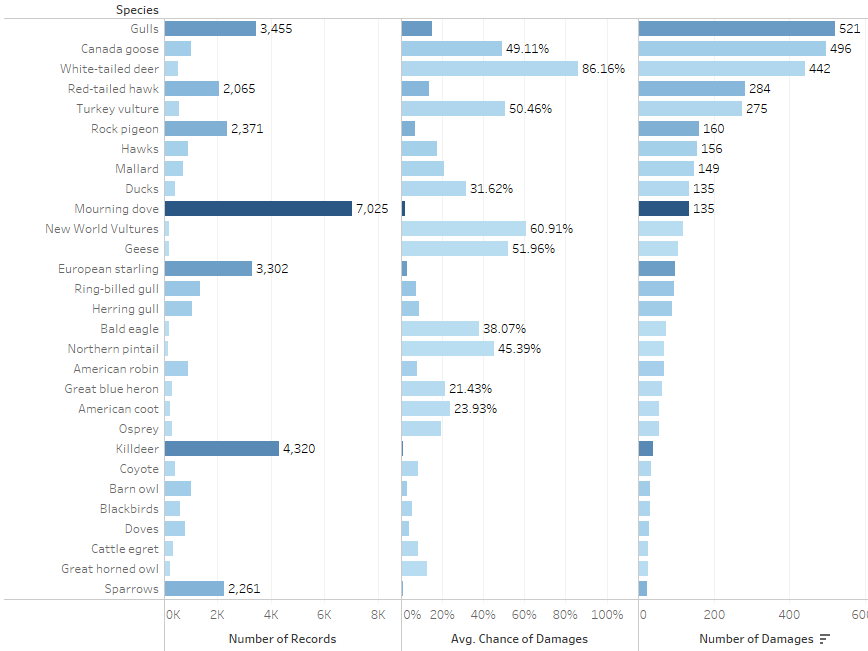 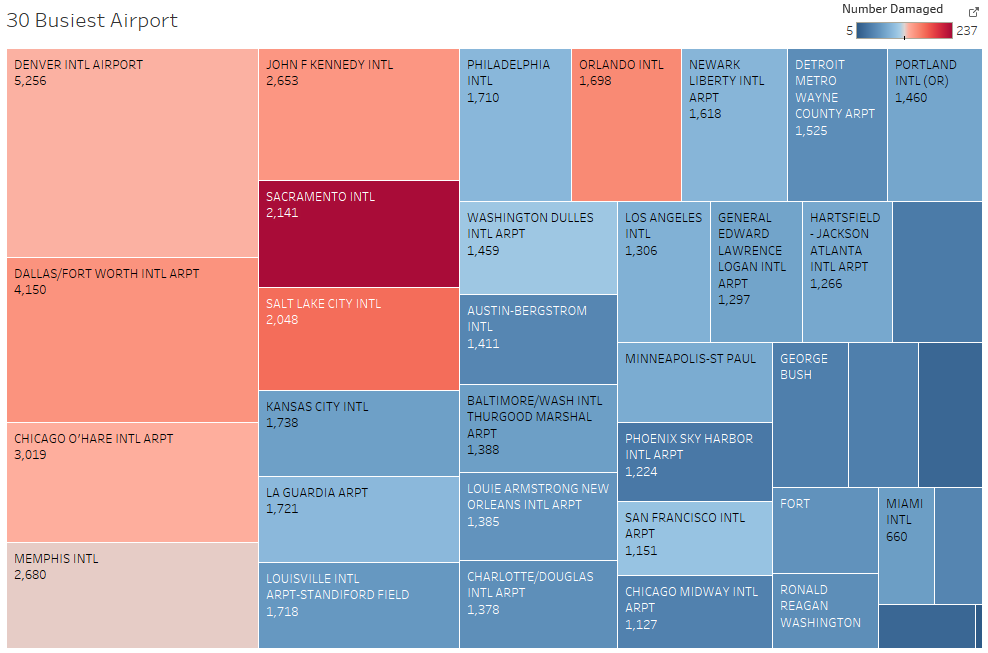 In conclusion, bird strikes usually cause no more than minor damage, but they can still pose a threat to flight operations. Pilots and operators should be knowledgeable that bird strikes occur more often in the late summer/autumn season and are more likely to be during the landing phase of the flight when the aircraft is at a low altitude.