Obesity is one of the biggest health problems across the United States. According to the data from the National Health and Nutrition Examination Survey:

Obesity is usually accompanied with various other diseases, which combined kill millions of people per year. These diseases include type 2 diabetes, heart disease, high blood pressure, nonalcoholic fatty liver disease, osteoarthritis, cancer, stroke and various others. The goal of this article is to provide a spatial overview of communities’ ability to access healthy food and quality diet, and to explore some environmental factors that are leading causes of overweight and obesity.

I used R to pre-process the dataset into a more suitable structure for analysis. Then, Tableau is used to provide data visualization and analysis.

Our data is acquired from United States Department of Agriculture (USDA). The dataset is the August 2015 version of USDA Food Environment Atlas that includes all states in the U.S. and their 200 attributes such as population, fast food store count, recreation & fitness facilities count, diabetes rate, obesity rate, National School Lunch Program participants rate, Household food insecurity rate, etc.  These data are from a variety of sources and cover several years and geographic levels.

In order to validate the dataset, we generated a simple scatterplot between diabetes rate and obesity rate for each state in the Figure 1 below. The reason we plotted such two variables was the well-established relationship between diabetic and obese. The strong positive correlation shown in the graph below gave us the confidence that the dataset agreed with our expectation.

Again, we can see from Figure 1 that obesity clearly put Americans at higher risk of chronic diseases like diabetes. 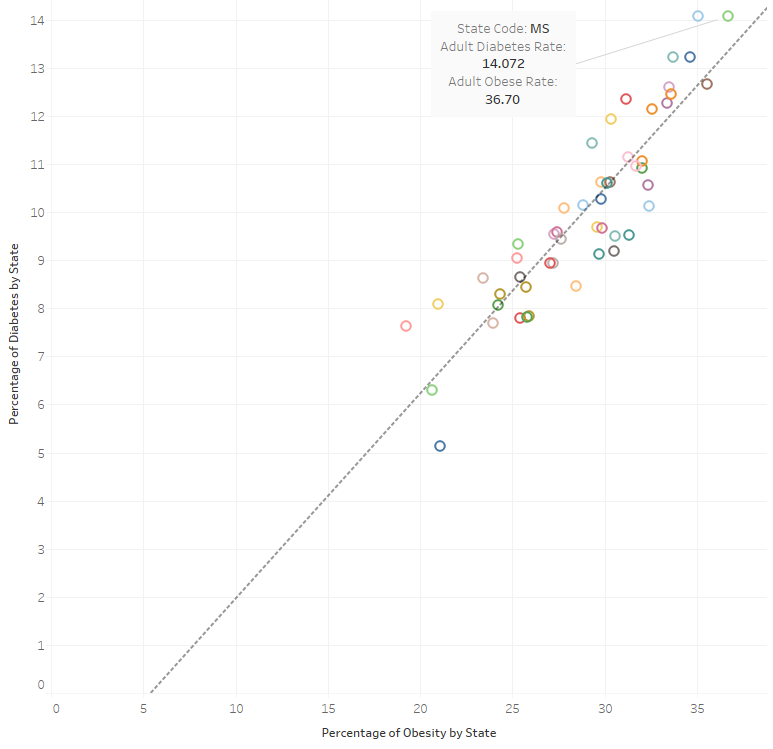 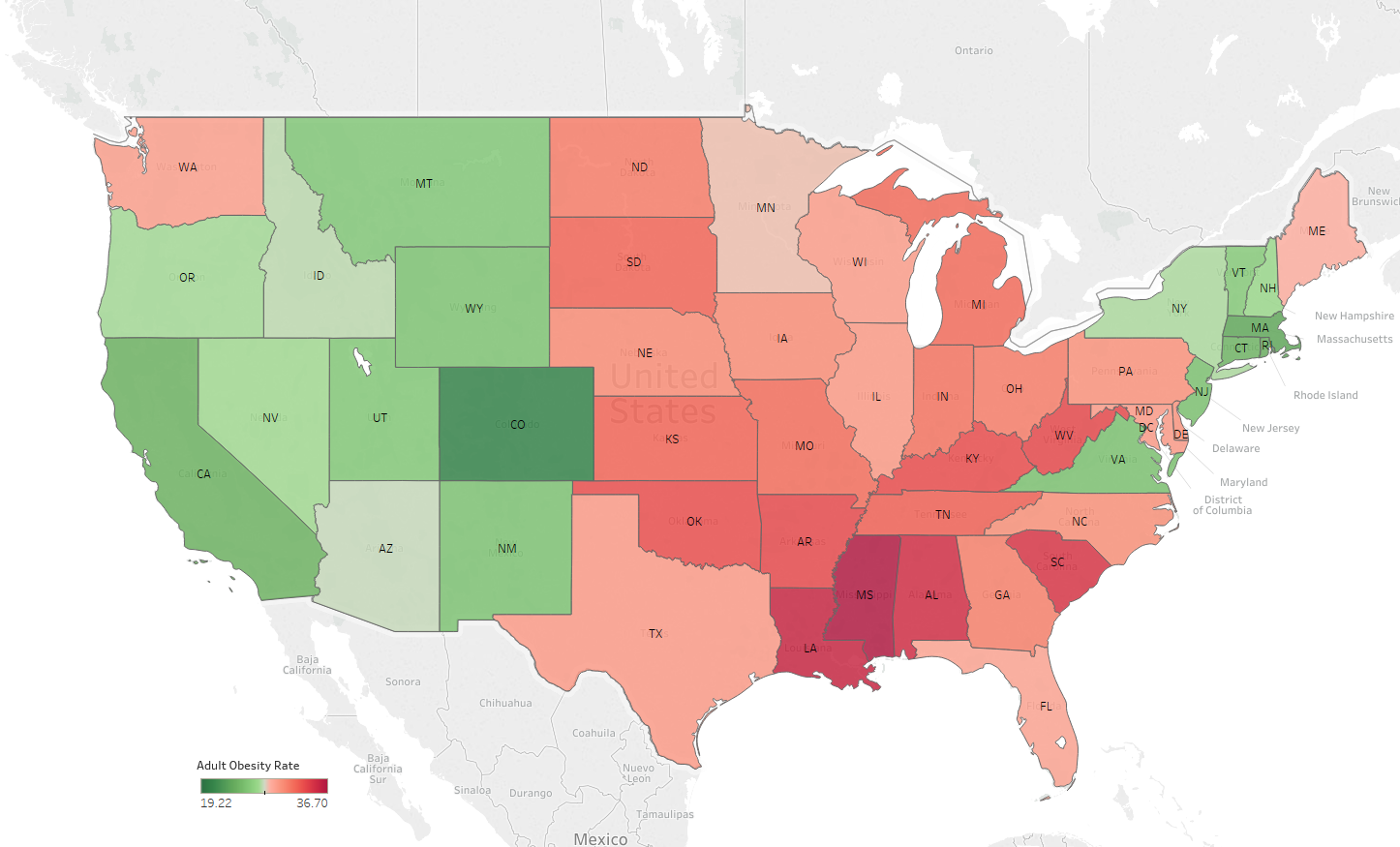 To summarize, the southeastern United States have the highest rates of obesity in the country compare to others. And below we will try to explore the possible factors that are causing the high obesity rates in these states.

According to stateofobesity.org, African-Americans are nearly 1.5 times more likely to be obese compared with Whites and Latino adults. Approximately 47.8% of African Americans are obese while the rate for Whites is 32.6 %. Figure 3 below clearly shows that the southeastern states are the states with highest African-American population, which may be one of the reasons for the high obesity rate among these states. 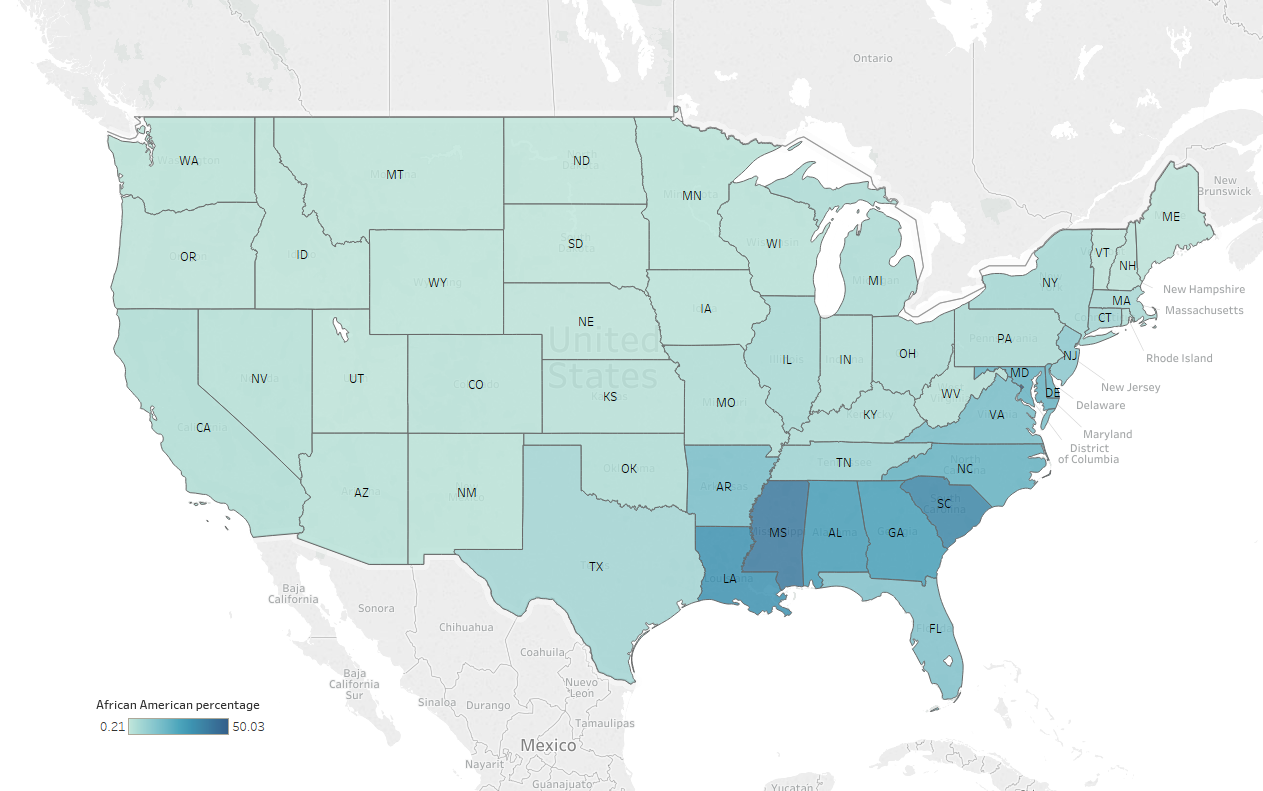 Another interesting factor related to obesity is the income level, since income level determines what kind of food one can acquire. 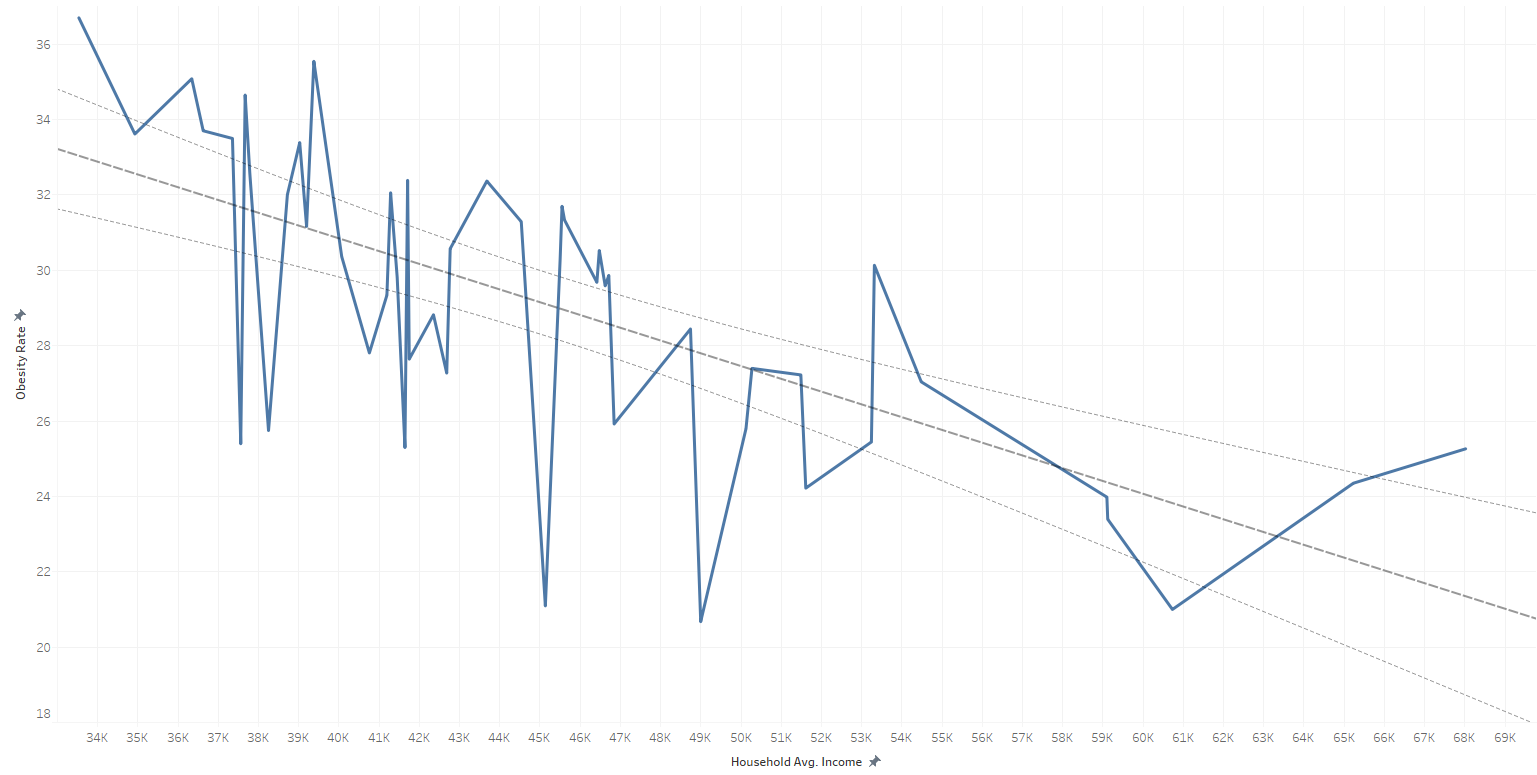 Figure 4 above shows that low-income and poverty have a strong correlation with an increase in obesity rate. This could be explained by the fact that most affordable or less expensive food are either less nutritious or calorie-dense. Also, people in poverty may not have consistent access to healthy food since they have limited access to supermarkets and fresh produce. On the other hand, gas stations and convenience stores are their main food sources, but these stores mostly sell sodas, candy, and junk foods only.

This phenomenon is what we call Food Insecurity. And with such less healthy eating pattern, it can be a contributing factor to weight gain and obesity. Figure 5 below proves that increase in Food Insecurity results in the increase of obesity rate with R-squared equal to 30%. It is also worth noticing that Mississippi, the highest obesity rate among the US, also has the highest food insecurity rate at 20.9%. 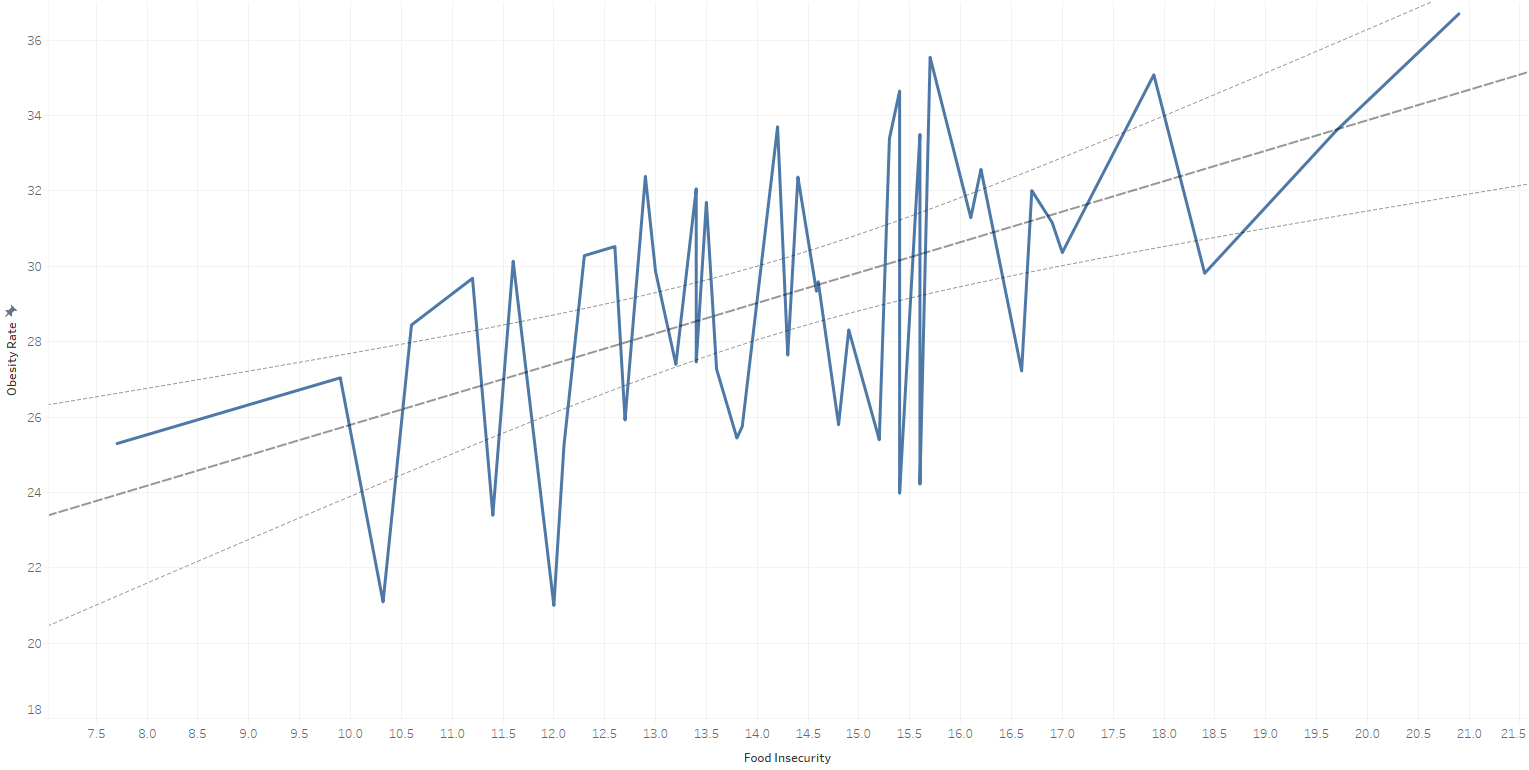 Achieving healthy energy balance also requires being physically active regularly. And one reason for people not engaging in sufficient amount of physical activity is the lack of places for recreation and fitness facilities. Figure 6 below shows the count of recreation & fitness facilities for each state. Orange indicates the states with the lowest obesity rate across the United States, whereas blue indicate the states with the highest obesity rate across the United States. 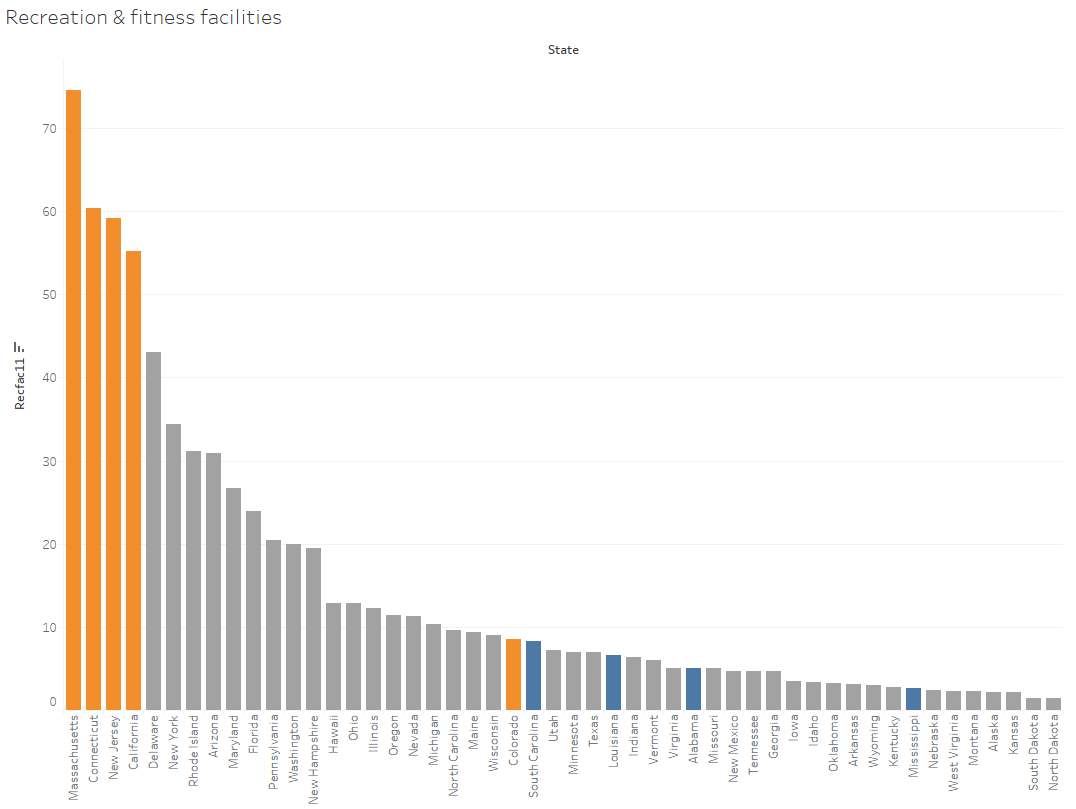 In the figure, we found that higher count of fitness facilities is more likely to support people with healthy lifestyle habits. In fact, it strongly influences the amount of physical activity. Four out of 5 states with higher numbers of fitness facilities are associated with the lowest obesity rate across the United States.

In this article, we demonstrate the use of Tableau and R to run data visualization regarding to obesity in the United States. As a result, obesity is an actual and serious health problem in United States especially in southeastern states. The wide availability of junk food and its low price have maximized the chances of impulse purchases for families in poverty. Also, the lack of places to recreation discourage people to engage in physical activity.

Therefore, the government may consider increasing their food security, enforcing state food policy on junk food, and increase affordable gyms that make people to be physically active in order to decrease the obesity rate.

40 thoughts on “Investigation of Obesity in the United States”